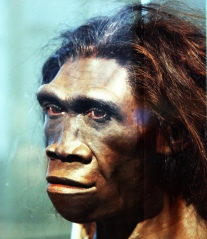 When was juggling invented? Or at what stage of human evolution were humans capable of juggling? This is a very tough question, since I don’t believe there is any evidence of juggling in prehistory. We know the ancient Egyptians juggled, but we can’t go much further back than that.

Could neanderthal man juggle? It is very difficult to say, since they all disappeared about 25,000 years ago, though I swear I run into one of them every now and then. There is some evidence of neanderthal ancestry in modern Eurasians, but this doesn’t help answer our question. They probably could juggle, since they were similar enough to us anatomically. The proper classification of neanderthals divides anthropologists into two waring camps, one claiming they were a separate species of human, the other claiming they are just a sub-species of homo sapiens. I wonder if biotechnology will become powerful enough some day so that we can bring back neanderthal man and help us resolve this issue.

What about our even more distant ancestors, homo erectus and homo habilis? The very ape-like Homo habilis, which lived from 2.33 million to 1.4 million years ago probably couldn’t juggle because they didn’t have upright posture(and maybe they lacked the brain module that allows modern humans to juggle). As for homo erectus, which did have upright posture, and lived from 1.8 million to 143,000 years ago, my unqualified opinion is that they probably could juggle.

Homo erectus may have been the first hominids to live in hunter-gatherer societies. The ability to hunt(and use tools, and read) and the ability to juggle may be interrelated. The brain size of homo erectus was on average about 69% of the size of the brain of modern homo sapiens. While they may have been less intelligent than modern humans, it really doesn’t require that much brain power to juggle 3 balls. Homo erectus probably used spoken language to some degree, though maybe not as elaborate as modern languages.

As for the first juggler who lived many thousands of years ago, unless someone invents a time machine, we will never know his or her name or anything else about this person. This juggler was most likely a homo sapien or neanderthal, since even if homo erectus was capable of juggling, they probably wouldn’t have wasted time with something like this. Juggling burns calories and prehistoric man had few calories to spare(which is why high calorie foods taste good, since being able to detect and enjoy rich energy sources gave a survival advantage to our ancestors). This is why it is unlikely that juggling predates the agricultural revolution and the birth of civilization.