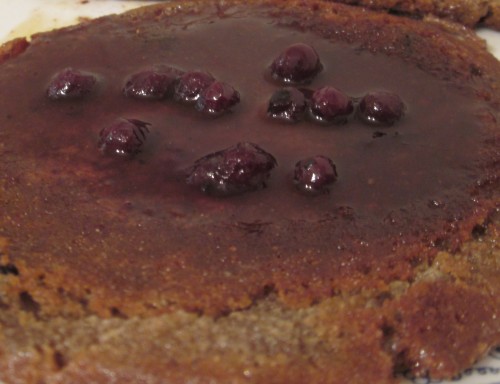 Everything else was the same and it was as vegan as ever. The almond meal and freeze dried blueberries were from Trader Joe’s. The almond meal makes the pancakes tastier, a bit crunchier, and boosts the protein and fat(the healthy kind) content. They also make the pancakes less fluffy, though luckily the beer can help compensate for this a little. If you like your pancakes fluffy use only a small amount of almond meal, substituting 20% of the buckwheat flour or less. You may also need to use more liquid lecithin(egg replacer) if you use a lot of almond meal, to help thicken the batter and bind everything together.

Another idea for those who prefer fluffy pancakes but also want them to taste almondy is to use almond milk instead of rice or soy milk. If you have time, I recommend making your own almond milk. One of my most favorite vegan/vegetarian blogs, Love and Lentils, has a terrific almond milk recipe.

The amount of beer I used was different this time. Last time, I substituted half of the rice milk with beer. Although the pancakes came out well last time, the beer tended to overwhelm everything else. I think 25% beer is better, but you can use as little or as much as you want. Some beer pancake lovers will use nothing but beer.

All in all, they came out better than last time. Sweet without being too sweet, blueberry-ish, chewy, buckwheaty, cinnamony, and beery! I highly recommend it!

Want to make your pancakes extra fluffy and tasty? Nothing will help achieve this better than beer. That’s right, beer. Most people think of it as just a beverage, but I think it is one of the most underused food items for making delicious meals. The bubbliness of the beer helps make the pancakes extra fluffy, while also imparting a more complex, deeper, somewhat earthy kind of flavor to them. I can’t  even remember last time I had regular pancakes. This is how indispensable beer is for making pancakes to me, and I don’t even like beer as a beverage. And obviously my pancakes are 100% vegan.

I love buckwheat since it’s a nice change from the usual grains I eat, and its a good source of quality protein. It’s not necessarily better tasting, but it’s different. Buckwheat was commonly eaten in 19th century America, but it was eventually supplanted by corn and wheat which are easier to grow. Buckwheat pancakes were even one of Mark Twain’s favorite foods. So these buckwheat pancakes are an old-fashioned favorite with a modern vegan twist. 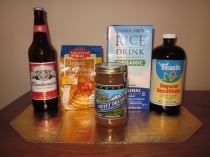 How I make pancakes:

Mix very thoroughly in a bowl. I don’t think the alcohol content of the beer or type of beer is that important. I used Budweiser, which is 5% alcohol. Go ahead and use a light beer if you want. If you’re worried about the alcohol content, keep in mind that a significant portion of the alcohol is removed through the cooking process. Just to be on the safe side, I think pregnant women shouldn’t eat this, unless very low alcohol beer or alcohol-free beer is used(or just use very little beer by diluting it with rice milk).

For the syrup, I mixed Lundberg organic brown rice syrup with some frozen blueberries and heated it on the stove. I am not sure if the brown rice syrup is healthier than maple syrup, but it does have a little bit less simple sugar.

After just a few minutes on the olive oiled griddle at medium heat on each side they will turn a golden brown, indicating they are done! The beer/buckwheat/olive oil aroma coming off the griddle as they cook is heavenly. I added a dash of cinnamon before pouring the blueberry syrup on them.

After running 52 miles in the past 3 days, my muscles definitely needed the high carb and sugar content of this meal to refuel my depleted glycogen stores. Although pancakes are usually eaten for breakfast, I had these for lunch after a 10 mile run.

The word “buckwheat” is misleading, since it is not related to wheat at all. It’s not even a grain. It’s a pseudo-grain related to rhubarb. These pancakes however aren’t wheat or gluten-free since they contain wheat ingredients(I don’t believe it is beneficial to eat gluten-free if you don’t have celiac disease or some kind of wheat/gluten sensitivity). The ingredients in the Arrowhead Mills Organic Buckwheat Pancake & Waffle mix are:

This is my favorite buckwheat pancake mix because it has few ingredients, most of which are wholegrain, it is vegan(no whey, or milk ingredients), and has no added sugar. One of these days I may try making buckwheat pancakes from pure buckwheat flour, which means I’ll probably have to add baking powder to the mix.

If you try this recipe out, let us know how you liked it!