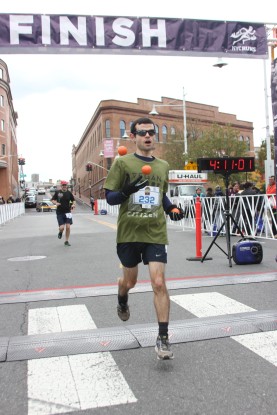 At the Yonkers Marathon in October. In spite of some difficulties, I managed to complete it.

2015 was a particularly eventful year in the world of joggling. It had its highs and lows, the biggest low by far was when Michal Kapral was not allowed to joggle the NYC Marathon by the fascists who organize the event. He ran the event without juggling and made big news anyway. For a synopsis on all that happened in the joggling world in 2015, read Michal Kapral’s post, The Year in Joggling 2015.

In my neck of the woods in the world of joggling, I’ve also had my highs and lows, with my low point being the disaster that was the Yonkers marathon. Due to knee issues on an especially hilly section of the race, it was my slowest marathon ever, finishing in over 4 hours. By some miracle I didn’t drop the balls, and besides this, during the marathon I joggled my fastest 30k(2:29:36), half-marathon(1:39:15), 10 mile(1:13:23), and 15k(1:08:07) ever. The crowd support was priceless and often pretty funny. The lesson learned from this is to take it easy on the hills. Luckily this knee issue/injury was minor, and I am currently joggling long distances again.

Besides this, earlier last year I completed another Looper Bowl, though as a runner, not a joggler. Even I’m not crazy enough to joggle on a snowy, hilly trail for several miles. This hilly trail run was held in early February during an arctic blast after several snow storms, so there was a lot of snow on the ground. My feet are still angry at me for what I put them through at the beginning of this run when it was only a few degrees above zero, though I had fun overall and didn’t get lost this time. Had even more fun joggling in the city during the summer.

In November, much to my surprise, I was mentioned and quoted in the NY Times in their article about Michal Kapral, “Running While Juggling Is Banned by Marathon Organizers”, even though I had nothing to do with this event. Also quoted were joggling super-stars Zach Warren, circus performer and development worker in Afghanistan who has broken world records in unicycling and joggling, and Richard Alec Ross, a development worker in Central African Republic, who, among his other duties teaches joggling to refugee children.

The more time goes by and I forget about the bad, the more 2015 looks like an extraordinary year of joggling. It may not have been my best year, or the year in which public perception of joggling has changed for the better so that it’s seen as a sport and not as a circus act, but we can dream. More importantly, I also dream of the world going vegan; it’s fantastic being able to combine two things that I love. In the mean time, I will continue to joggle, and intend to make 2016 my comeback year; besides this, I’ve also recently taken up a cross-training activity that I will get to in another post.