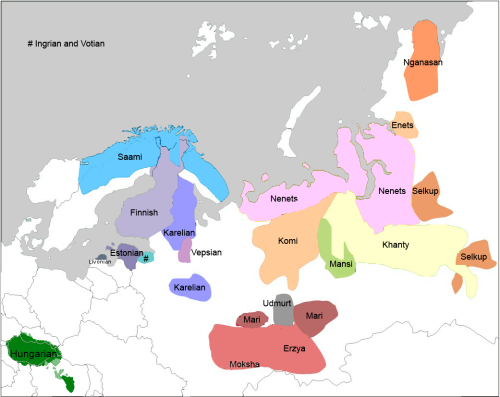 The Finno-Ugrian peoples of Eurasia

What is the Finno-Ugrian Suicide Hypothesis?

Multiple lines of evidence indicate specific genetic contributions to suicidal behavior. In particular, geographic studies support the Finno-Ugrian Suicide Hypothesis, i.e., genetic differences between populations may partially account for geographic patterns of suicide prevalence. Specifically, within Europe the high suicide-rate nations constitute a contiguous J-shaped belt. The present research replicated and extended 2003 findings of Voracek, Fisher, and Marusic with new data. Across 37 European nations, an interaction term of squared latitude multiplied with longitude (quantifying the J-shaped belt) accounted for 32% of the cross-national variance in total suicide rates alone, while latitude accounted merely for 18% of variance over and above those. Refined analysis included regional data from countries critical for testing the hypothesis (89 regions of Belarus, western Russia, and the Ukraine) and yielded an even more clear-cut pattern (56% and 3.5%, respectively). These results are consistent with the Finno-Ugrian Suicide Hypothesis. Study limitations and directions for further research are discussed.

Some of you may be wondering who the mysterious Finno-Ugrians even are. They are simply a diverse ethno-linguistic group that is native to eastern Europe, Scandinavia, and Russia. The most well known are the Finns and Hungarians. In the map above, you can see their lesser known linguistic cousins scattered across much of Russia and northern Scandinavia.

The thing that is most remarkable about these peoples, besides the genetic isolation of some of the northern groups, is that they are among the few native Europeans whose mother tongue is not an Indo-European language. Almost everyone else with a long history in Europe is a speaker of an Indo-European language, like Italian, Russian, German, Greek, Spanish, and even English(some genes are said to be associated with the early spread of Indo-European languages, but that is beyond the scope of this post). No, it’s not because they are an extreme ethno-linguistic minority that Finno-Ugrians have a higher suicide rate.

The Finno-Ugrian Suicide Hypothesis suggests that genes that are unique to or occur more frequently among Finno-Ugrians predisposes them to suicide. For a long time, many researchers just assumed that the extreme northern environment many Finno-Ugrians live in, and social factors were the primary cause of their higher than average suicide rate. However, when researchers controlled for the environmental and social factors(comparing them to non-Finno-Ugrians living in the same environment), it became apparent that something genetic was making a significant contribution to their higher suicide rate. Of course, this is something that shows up in aggregate, and doesn’t render environmental or social factors meaningless for individuals.

While these genes tend to be mostly unique to speakers of Finno-Ugrian languages, some Russians and other Indo-Europeans in eastern Europe carry these genes. Russians also have a high suicide rate. This may be due to the Russians slowly assimilating many Finno-Ugrians over the centuries into the larger Russian ethnic group, as Russia expanded across northern Eurasia and Russified many different native ethnic groups. In other words, this means there are people who are Finno-Ugrian by blood who speak Russian or other non-Finno-Ugrian languages as their first and only language.

In part, I am fascinated by this because Linus Torvalds, the influential software engineer who created the kernel of the Linux/Android operating system I use is Finnish, besides, of course, my interest in genes and mental health. And Finland has also produced some amazing runners. They haven’t been able to find any Finno-Ugrian running genes though.

Why Finno-Ugrians have these “suicide” genes is a mystery(it is possible they have some advantage), but please don’t panic if you are Finno-Ugrian or know someone who is. Of course, we can’t change our genes(not yet), but hopefully, science will find better ways of treating mental disorders that lead many to suicide.