Running the 2013 Yonkers Marathon while juggling

It has been exactly one year since the founding of Wild Juggling! Over the past year, Wild Juggling has grown to 290 posts, 675 followers, slightly over 25,000 page views, and something around 150 bad jokes. It has been viewed and continues to get viewed in dozens of countries around the world.

Also over the past year, I have become a faster runner, ran one marathon in under 4 hours while juggling, did one podcast interview, and even partially joggled up a “mountain”.

But even more important, based on feedback I have gotten, I have inspired many people to exercise more(and I have been inspired in return). Some people tell me they are interested in going vegan because of my example. I still haven’t met a person who became a joggler though after reading my site, but inspiring people to joggle isn’t the main purpose of this blog. Inspiring people to live healthier lives, and to have more fun with exercise is the main purpose.

Thanks to all my followers for your support. All of you are great, and I continue to learn from you and your sites. I always look forward to your feedback. It has been fun. Let’s make Wild Juggling’s second year even more fun. Oh, and be sure to come back later since there will be a giveaway contest to celebrate the anniversary. 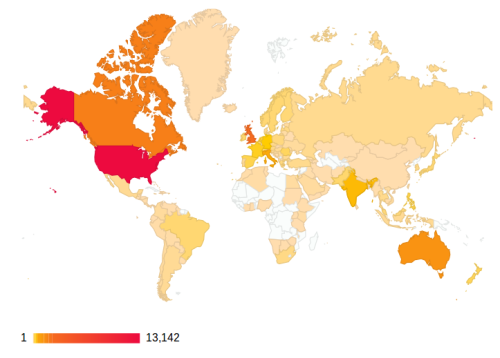 Countries of the world where Wild Juggling has been viewed