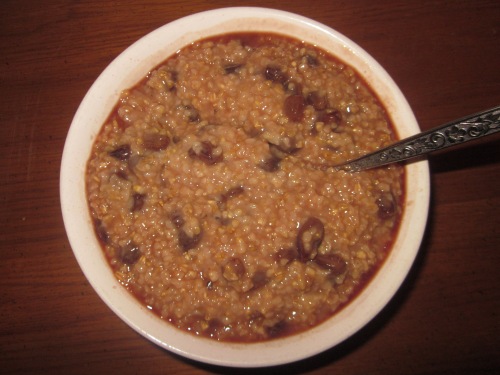 Here’s another thing you can do with cherry kefir juice: Add it to oatmeal. It really adds a lot of flavor to the oatmeal, plus some healthful bacteria.

What probiotic foods are you eating these days?

Runner with Rhabdomyolysis by Chris Pert

What is rhabdomyolysis, and should you be concerned about it? Rhabdomyolysis occurs when muscle tissue rapidly breaks down due to rigorous exercise or injury and enters the bloodstream. This can be harmful to the kidneys and in extreme situations can lead to kidney failure.

Strenuous exercise, including marathon running, can result in damage to skeletal muscle cells, a process known as exertional rhabdomyolysis. In most cases, this damage is resolved without consequence. However, when the damage is profound, there is a release of muscle proteins into the blood; one of these proteins, myoglobin, in high concentrations and under certain conditions (such as dehydration and heat stress) can precipitate in the kidneys, thereby resulting in acute renal failure. Although the marathon is a gruelling physiological challenge, with races sometimes run in hot and humid weather, acute renal failure is relatively infrequent. From case reports, a high proportion of marathon runners who developed acute renal failure had taken analgesics, had a viral or bacterial infection, or a pre-existing condition. The rare cases of acute renal failure in marathon runners may be a situation of the ‘perfect storm’ where there are several factors (heat stress, dehydration, latent myopathy, non-steroidal anti-inflammatory or other drug/analgesic use, and viral/bacterial infection) that, in some combination, come together to result in acute renal failure.

So it looks like most long distance runners don’t need to be overly concerned about developing this condition so long as they stay well hydrated, do not use pain medication or keep it to a minimum, and don’t have any pre-existing conditions. If you are a runner with kidney problems, you may want to consult a doctor before running a marathon, just in case.