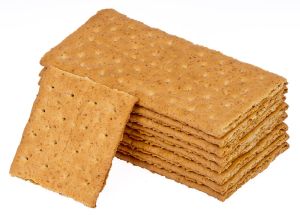 Graham crackers were invented to cure what? Source: Wikipedia

The leadership of the various healthy eating and vegetarian movements over the past few centuries includes a lot of quacks, charlatans, and wackos. However, even some of the wackiest had some helpful ideas. A good, and early example of this type of health pioneer is Sylvester Graham(1794 – 1851). He was an American dietary reformer who advocated vegetarianism and eating only whole-grains rather than refined grains. He was the inventor of the graham cracker, which in its original form was made from whole-grain flour and free of sugar, spices, flavorings and preservatives.

So what are we to make of such a character? I find it fascinating how Graham was right about the negative health effects of refined grain well before science finally figured it out. On the other hand, his belief that a vegetarian diet could cure alcoholism was laughably wrong.

Of course, there are still many wackos in the vegetarian movement, and of course among meat-eaters. But this says nothing about the virtues of either diet.

There are no longer any “Grahamites”(as his followers were called), but some Christian denominations like the Seventh Day Adventists continue to practice vegetarianism.

Graham may be long gone, but there are health gurus out there still making ridiculous, pseudo-scientific claims, often mixed promiscuously with good health advice. Don’t take anything on faith and do your own research to uncover the facts.