Parkinson’s disease is a disorder of the central nervous system that slowly leads to almost total loss of motor function. At later stages, it can lead to dementia. The ultimate cause of this disease is not known, though genetics and exposure to toxins appears to play an important role. The proximate cause appears to be an accumulation of proteins in certain neurons, and lack of dopamine in the parts of the brain responsible for movement. “The discovery of dopamine deficiency in the parkinsonian brain” by Dr. O. Hornykiewicz gives a detailed account of how scientists unearthed the link between dopamine deficiency and Parkinson’s disease.

Parkinson’s disease is currently incurable, but it can be treated in its early stages by drugs and other interventions. As time goes by, and the disease progresses, these drugs become less effective. At more advanced stages, doctors may implant electrodes in the brain to provide “deep brain stimulation”, but not everyone responds well to such treatments. 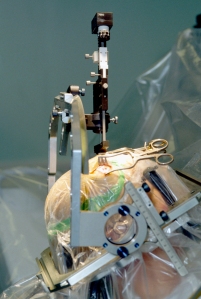 Placement of an electrode into the brain. From Wikipedia.

There are of course other, less invasive ways to stimulate the brain to slow down the progression of the disease. According to research done by Rose MH, Løkkegaard A, Sonne-Holm S, Jensen BR, at the University of Copenhagen, high-intensity locomotor training can greatly improve Parkinson’s symptoms. Similar research conducted by Cakit BD, Saracoglu M, Genc H, Erdem HR, Inan L., at Ankara Education and Research Hospital, Turkey, show treadmill training can improve mobility in Parkinson’s patients, and reduce their fear of falling.

So it appears that regular exercise in the early stages of Parkinson’s can slow down the disease’s progression, with or without medication. David H. Blatt, M.D., who is himself a Parkinson’s sufferer and runs the website, Exerciseforparkinsons.com, recommends regular exercise to treat Parkinson’s, especially learning how to juggle. In his own words:

He has many inspiring videos on his website which demonstrate the benefits of his approach. Juggling and exercise may prevent other neurological conditions besides Parkinson’s, as my previous post demonstrated. I would love to see some studies to see if and how juggling helps Parkinson’s patients. As time goes by, the list of benefits of juggling and exercise in general continues to grow.